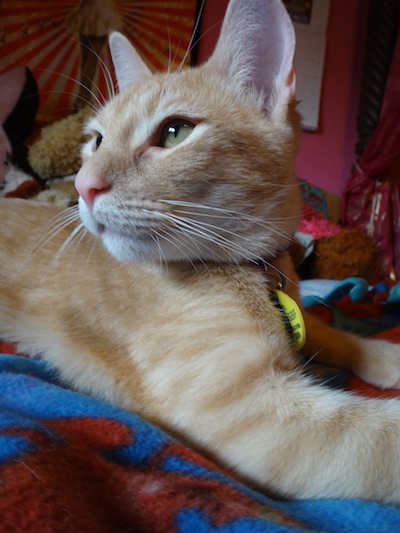 I know I don't looks it here, but I has been being ca-razy dis pastest couple a days.  Well, da weather here have been crazy too.  It went from being 82 on Caturmaday to being 12 as a low last night.  Dat are one crazy drop and it inspired me to run all over da house like a nutso.  I were just zippin round, bouncin off walls, you name it.

Yestermaday was Maurice's birfday and it were a fun day.  He got new toys, which means I got new toys to steal!  I been tryin to steal em, but momma keeps on givin em back to him.  I don't know why.  I guess I'll have to resort back to stealin nail files and other borin stuffs like dat.

But da good news - we's had bacon for da pastest 2 days and I got some bacon bits!  I LUV bacon, it are just da bestest thing in da whole wide worlds.  YUMMMM.  You know what else are good?  Butter!  I got caught lickin da butter stick dat had been out because da humans was butterin dere biskits.  They acted all grossed out and started laffin.  I don't know why they's laffin.  Butter are delishus!

So I just heard Miss Ally, Maurice's momma, openin up da fridge - hopefully it means food time for me!  I gotta go check it out!